I just found a great windows explorer extension at Codeproject called The Command Prompt Explorer Bar. With that installed, hitting Ctrl+M when in explorer splits the explorer-window so part of it shows the folder contents and part of it shows a command prompt opened at the current location. Clicking around in the graphical tree folder hiearchy also sends cd commands to the command prompt so the two windows stay synchronized. It's fabulous stuff: 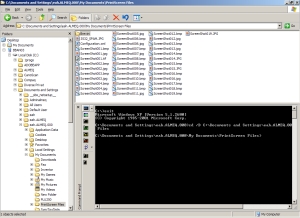 I started to think about what a hassle it is, not being able to use Ctrl+V to paste text into command prompts and discovered there are some alternatives such as Alt+SPACE, E, P which brings up an E&dit -> P&aste menu.

I made a simple AutoHotkey script which lets the user type Win+V for paste: (More similar to Ctrl+V and faster than Alt+SPACE, E, P)

Are there any good workarounds for this? I've thought of something like:
screenupdate=false
paste text
maximize command prompt
screenupdate=true

but that's ugly and to my knowledge there is nothing that can "freeze" the screen this way. I also thought of taking a screenshot, then filling the screen with that screenshot, paste the text and maximize the command prompt "behind the screenshot" and then remove it, i.e. use a screenshot like a screen-curtain, but that's even uglier.

How can this be accomplished?

P.S. Is AutoHotkey ready for Vista??

PhiLho
Why is this topic in the Scripts & Functions section?
Beside that, I should try this bar, at work I often have to use the command prompt and using this should ease the navigation.
Two shortcuts on the cmd that you (or somebody else reading this) might not know (might need some registry tweaking or option setting): Tab autocomplete the file name or dir name you started typing, cycling among the possible candidates; and right-click copy the current selection to clipboard (you might also want to activate Fast Edit Mode and Insertion Mode) if something is selected, and paste the textual content of the clipboard if nothing is selected.
Simulating a right-click with AHK in the window client area also works. Normally in a console window once focused, you can right click and paste, so should work if their console is standard create process.

Murple
Sorry for posting in the wrong category, I spent so much time on that entry that I didn´t give any thought to the category I was posting in.

Right-clicking to paste in the command prompt is fine, it would just be nice to have a surefire way of using Ctrl+V or Win+V instead. I´ll try to simulate right-clicking thoug. Thanks,

It was the point: selecting Paste terminates full screen mode. If you don't use that, there is no problem with pasting.

PhiLho
Aaah...
I never use such program in full screen mode, the mouse seems disabled here... It is too big and ugly on my LCD screen anyway.

Murple
This forum is fantasticly active and helpfull. Thanks a lot to all three of you. I´m definetly going to implement some of this.

Just add {RAW} after SendInput, if you ever need to paste the AHK reserved characters.

I've to register there to be able to download it. :?